Amsterdam, NY — Residents of this small upstate city were stunned to learn of the millions of dollars spent on ice cream, hot dogs and other gourmet indulgences for kids by the city’s recreation department.
While initially ridiculed for their insistence on going through budgets “line by line”, the persistence of the city’s legislative body, the Common Council , prevailed in identifying the more than $23 million expense hidden within the city’s financials in just a single department.
Sixth ward alderperson, Lynne Bylyn, commented, “We always knew that there were untold millions in expenses hiding under the very small budget of the recreation department. Any savvy financial person knows that if you want to fix the financial challenges facing the city, you go after the smallest department and the department that deals with the city’s most affluent — its kids. Folks act surprised that a department with an $89,000 budget spends millions needlessly — that’s not a surprise, that’s just common sense!”
A breakdown of the outlandish $23,050,218  million spent on 656 ice cream sundaes, 1500 hot dogs and 8 promotional t-shirts is provided below. The number is expected to rise even more once the expenses for catsup, mustard, and relish are detailed in an upcoming report.
Local officials expressed enthusiasm at how much they could uncover in other , larger departments. According to an unnamed source familiar with the city’s financials, “The city is literally spending billions of dollars without anyone knowing. We’re going to save billion of dollars once we stop spending it foolishly. The people and especially our seniors owe a debt of gratitude to the Council’s efforts.”
$16,400,000 —  656  “Frrozen Haute Chocolate Sundaes at $25,000 each
The “Frrozen Haute Chocolate,” a blend of 28 cocoas, including 14 of the most expensive and exotic from around the globe.
The dessert, spelled with two Rs, is infused with 5 grams (0.2 ounces) of edible 23-karat gold and served in a goblet lined with edible gold. At the base of the goblet is an 18-karat gold bracelet with 1 carat of white diamonds. 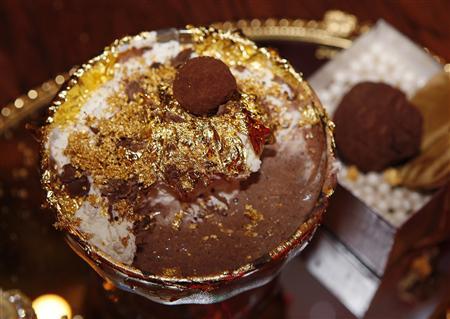 $3,450,000 — 1500 hotdogs at $2300 each
Each hot dog made out of 60-day dry-aged wagyu and topped with Vidalia onions caramelized in Dom Perignon, sauerkraut braised in Cristal, and caviar